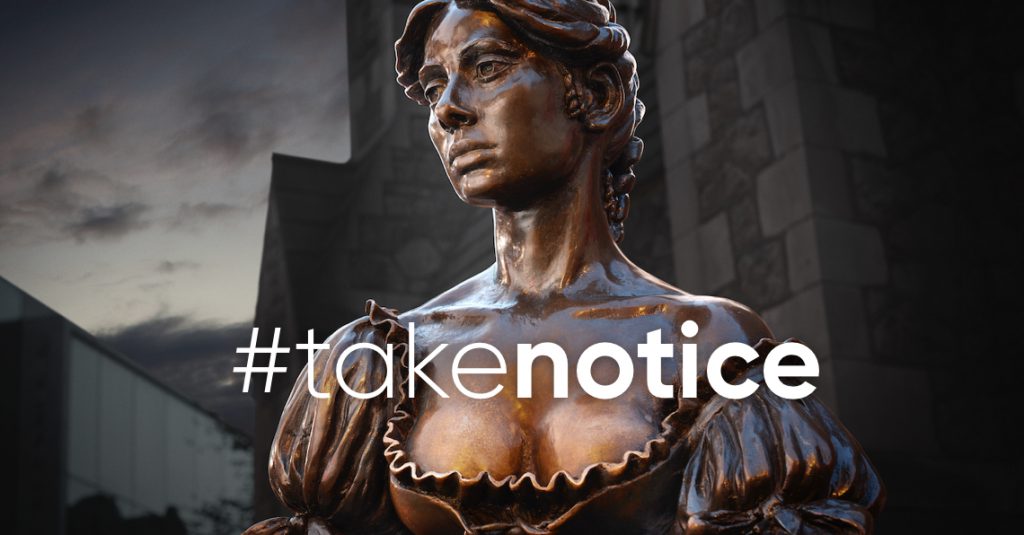 If one of the most touched and photographed breasts in the world suddenly developed a lump, would anyone notice? That was the key question asked by leading Irish cancer charity, the Marie Keating Foundation, and creative agency ROTHCO | Accenture Interactive, as part of their arresting new campaign, ‘Take Notice’, for Breast Cancer Awareness Month.

Molly Malone,  the enigmatic heroine of the famous song of the same name was the star of the ‘Take Notice’, campaign which urges women to be more aware of their breast so they can notice any changes.

Realising that people seem to be more aware of Molly’s breasts than their own, the Marie Keating Foundation and ROTHCO decided to leverage the public’s obsession to spark a national and international discussion about breast health.

ROTHCO created and placed a small lump on one of Molly’s breasts, which went unnoticed by the general public, who continued to take pictures with Molly and touch her bosom. The campaign film – which features a touching bespoke rendition of Molly’s song by Irish singer Imelda May – highlights to the public that if a lump on the most famous and watched pair of breasts in Ireland can go without detection, women have to be extra vigilant and thorough with their breast examinations.

“Breast Cancer Awareness Month is critically important in raising awareness but we know sometimes the message to form the habit of checking yourself is lost in the sea of pink. We knew that to make people take notice was going to require a really simple idea to genuinely cut through. Using an iconic bust like Molly Malone seemed to be the perfect starting point to highlight how easy it is to miss something when you’re not looking for it, ” Kathy Troy, Head of Strategy at ROTHCO.

Liz Yeates, CEO of the Marie Keating Foundation and breast cancer survivor says: “Being breast aware is so crucial to give women the best chance of getting advice and treatment as soon as they may need it. This ‘Take Notice’ campaign hopes to bring this to the forefront of the public’s mind and encourage women to be more breast aware by using the most famous pair of breasts in Ireland. If a lump on Molly Malone’s breast can go unnoticed then it reinforces just how important it is that women take notice and make self-checking part of their everyday routine. Know your ‘normal’ so you can act immediately if you notice any changes”.