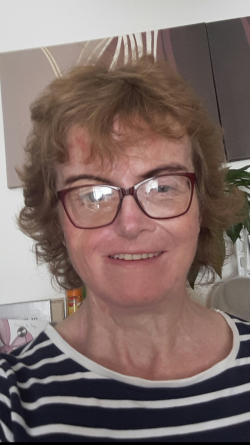 In 2016, a ‘weird little lump’ on the roof of Mairead Lavelle’s mouth changed her life and started her on an extraordinary battle with mouth cancer. Through the support of family and friends as well as her positive mindset, Mairead has made a remarkable recovery from this debilitating disease. This is her story.

At the age of 30 I was diagnosed with Gorlins Syndrome, a genetic condition which means I have had multiple Basal Cell Carcinomas and Keratocysts removed. This had one advantage – I was a regular patient of Prof Gerry Kearns, Maxillofacial Consultant in James’s.

In October 2016 I was in theatre awaiting surgery to have a Keratocyst removed. Gerry came to talk to me pre-surgery and I mentioned I had a weird little lump on the roof of my mouth. He checked it out and said “since you’ll be asleep I’ll take a look”. After surgery he told me there was something there and that he’d send it off for biopsy. In my innocence, I assumed it was a cyst, and thought nothing of it.

One week later, on the 21st October, I was back in for post-op check-up. Gerry explained it was a tumour, and that I was not to panic as his colleague Conor Barry specialised in Maxillofacia Cancer. Gerry gave me two bits of invaluable advice that day “talk about your diagnosis but don’t Google it”.

One week later I met Conor and over the next few weeks he drip fed me information. He told me he was optimistic he could remove the tumour, but I would loose my eye, part of my jaw and most of my cheek. He said I would be out of work for at least 18 months.

On 24th November Conor and his team operated on me for 10 hours painstakingly removing the squamous cell tumour. I was in ICU for a few days before being moved to a ward. I was tube fed for a month and couldn’t speak for about a week. Recovery was slow and a bit scarey as I adjusted to my battered face and reduced vision. I was discharged on 23rd December.

As I live alone I stayed with my brother and his wife for three nights but just wanted my own bed. Having looked forward to escaping from hospital, I found it very daunting. Being responsible for all my meds was a big shock and Christmas wasn’t great as I had lost my sense of smell and had no interest in a liquidised Christmas dinner. Once I got home, I improved rapidly. I love cooking and found it very therapeutic and eventually my appetite improved.

I then had six weeks of Radiotherapy. Dr Sinead Brennan in Lukes told me Conor had achieved amazing margins and she was confident my prognosis was good. I finished on 1st March having lost three stone in five weeks. The staff in Lukes told me I was one of the most stubborn patients they ever met –  they said that every day I would come in looking green and they’d suggest I’d take a day off and I’d say “No way – I have to finish on 1st March!”

After I finished Radiotherapy I took to the bed and couldn’t get up. After I gave myself two weeks to recover I decided to get a rescue dog who forced me to get up, get out and talk to people – he is amazing!

Recovery from Radiotherapy was very slow – Dr Gerry Kearns eventually did the reconstructive surgery, taking a bone from my hip and putting it in my mouth. He then put titanium implants into that bone and the bone over my eye. Eddie Cotter then made my teeth, which also plugs a hole on roof of mouth which has never healed. Niall Murphy in James’s then made my prosthetic eye a few weeks ago, in June, which is attached with magnets. I was very involved with the making of my eye and thoroughly enjoyed the process.

You asked me how I coped and I’d say I am very stubborn and very positive. I always felt I would beat it. I now know it was stage 3 at diagnosis and I had no symptoms except a tiny lump. I was unaware it was in my eye socket. I am lucky that Gerry Kearns listened to me when I mentioned the lump. I am blessed that Conor Barry was in James’s at the time (and hopefully he’ll stay there!!) as very few surgeons worldwide perform that op (Weber Ferguson Incision). I have an amazing family and great friends. I did have bad days but tried to find something positive in every day. I also got amazing support from the NCBI who provided me with a free counsellor who got me through the bad times. I love walking – when I was in James’s for a month I walked all over the hospital. I also love talking which helped. I have a great relationship with my medical team and I owe them my life.