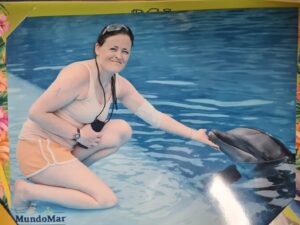 Aoife Murray a mother of 4 from Sligo was 34 when she received the news that she had stage 3 lung cancer.

Aoife had noticed a persistent pain in her chest and back which she assumed was a pulled muscle. When she started to suffer a persistent cough, she thought perhaps it was a chest infection and again powered on. It was only when Aoife noticed 2 swollen lymph nodes in her neck, she realised that she needed to go to the doctor.

“If there’s something doesn’t feel right in your body, Go, get checked like What’s the worst thing that can happen, that they tell you nothing’s wrong? My problem was I would never go to the doctors. Even when I got a chest infection I’d say, oh, I’ll be fine, I’ll get over it. With the pain in my chest and shoulder I was sure I had just pulled a muscle on my walk, and I could treat it with deep heat. The only reason I went to the Dr this time was because of the swollen lymph nodes. I knew the two lumps on my neck just wasn’t right”

Her doctor initially prescribed antibiotics for what was an assumed chest infection but then after a course of antibiotics was completed with no change she was then sent to the hospital for further tests.

Aoife expected this to be a routine examination that would take no more than a few hours. Her husband Daniel and children accompanied her and waited in the car while she attended the appointment.

“When we went to the hospital Daniel and the kids had to wait outside in the car, as it was around the time that nobody could go into the hospital because of Covid. So, when they said there was an abnormality and asked me to wait for further tests. I said my husband and children are sitting outside in the car, can I go outside to them and explain what’s going on. I was just mad to get out of there. I heard abnormality, and all I wanted was Daniel and the children. I expected to go home, not to have to ask them to go get pyjamas for me to stay overnight”

The following day Aoife had a CT scan which showed a 5cm tumour on her lung and a 9cm tumour on her lymph nodes.  The day passed in a blur but thankfully she had the support of her husband Daniel who asked all the necessary questions and listened to the doctors while Aoife struggled to take in what was happening.

It was September 2021 when Aoife received the news that she had stage 3 lung cancer.

Aoife had smoked for almost 20 years, but she has not smoked since the day of her X-ray.

“When I went for my lung capacity test, they asked me why you were sent for these tests, your lung capacity is at ninety percent. They are still uncertain as to why lung cancer manifested in me so young. I don’t have a genetic mutation or anything like that and it didn’t align with it being smoking related”

One of the most difficult parts of the diagnosis for Aoife and her family was dealing with its emotional impact.

“I had a hard time taking it in. Yeah, you think I’m gone. That’s it. Like Daniel went through a terrible time with me. He found me sitting in the bedroom saying I’m going to die, picking my funeral casket. I was totally convinced, no matter how many times they told me my treatment was working, that I was going to die”

I think that any patient in this country that is diagnosed with any form of cancer, should have an immediate access to mental health support. That’s when you need this service to become available, from the time of diagnosis onward.

Some people like me, for example, if I was diagnosed with cancer, I know me as a person, I would just get on with it. That would be just me, but it would be when everything is over that I would crash, you know, and that’s when I would need it, but you shouldn’t have to wait”

Aoife found that her mental health was impacted as much as her physical and agrees with her husband on the need for earlier intervention when it comes to mental health support and a cancer diagnosis.

“I needed help for what’s going on in my head. Never mind what’s going on in my body, my counsellor has had me understand my feelings, that when I was like that, it was me trying to address my true feelings you know, when you are crying, it’s a good thing, you know that you are letting your emotions out, its good to have a release”

Over the last 18 months Aoife has undergone 6 rounds of chemotherapy and 30 sessions of radiation and is currently receiving an immunotherapy treatment called Imfinzi. Her latest scan in August showed that there is currently no sign of cancer a term Aoife finds preferable to remission.

“People don’t always understand the medical language like I’ve learned new terms that I’ve never heard in my life: I read somewhere that someone said, you’re not in remission until your five-year scan is clear, and I’m like, so I’m not in remission?  That’s very confusing. That leaves things very open. There is no evidence of disease currently is what I’ve picked up, it’s not doing anything”

Daniel added “In my opinion, everyone that goes through cancer is superheroes. I don’t care what type of cancer you have.”

This has been the hardest year of her and her family’s life, but she is so grateful to be here and they are focusing on the future, making as many memories as possible. This has brought them closer than ever.

The photo highlights one such memory made a family holiday this summer doing something that she always wated to with those she loves.

Aoife is sharing her story in support of The Marie Keating Foundation’s The Big Check Up Campaign 2022 and our call to action for a comprehensive Lung health check for those at high risk which can find lung cancer earlier than when symptoms appear, giving treatments the best chance to save a life. This November, during Lung Cancer Awareness month, the Marie Keating Foundation is partnering with people with lung cancer, clinicians, cancer researchers and you the Irish people to call on the Minister for Health to introduce a lung screening trial in Ireland.