Ashley was diagnosed in 2005. She had a lumpectomy 10 days before Christmas and a repeat surgery in January 2006. She started chemotherapy in March 2006, followed by radiation treatment and brachytherapy. Nine years later, she was diagnosed with a second primary breast cancer tumour. She underwent a mastectomy and chemotherapy. 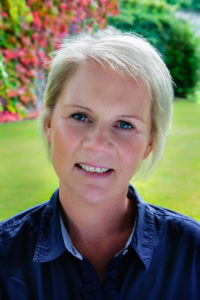 My life was kick-started when my breast cancer came back nine years after my first diagnosis. I wasn’t going to sit around and let cancer consume me. If it wanted me, it could chase me.

I started a countdown to chemo challenge and tried to fit in as many things as possible before chemo started. I never travelled as much as I would have liked to so, with my family and friends, I just started throwing darts at a map and off we’d go. Ryanair became our best friend. We went to Barcelona, Amsterdam, Marrakesh and Portugal.

And, because I wasn’t physically unwell during the treatment, the countdown to chemo challenge continued right through chemotherapy. I’d get a heparin flush every three weeks and then I was off. Immersing myself in foreign cultures kept me focused and upbeat.

I went to the see The Cure in London, which was a big treat for a former Cure-head. I went to Rome with my son.

As the chemotherapy was coming to an end, I asked my consultant if I could go to Dubai before my last session. He took some persuading, but I promised I’d stop off in Istanbul for a few days to break up the trip. It was fantastic. I landed in Dublin from Dubai the night before my last chemo session.

I got cancer but I definitely got the travel bug as well.

My children were and still are my driving force. When my treatment was over, my youngest son and I went on a celebration trip to the US because he had gone through this journey with me. We had a special sleepover at the Natural History Museum in New York, with nothing but a torch and sleeping bags and about 30 other people. We got to run through the halls in the middle of the night looking for Dum Dum and we got to sleep under that famous big blue whale in the lobby. It was a once in a lifetime experience.I’ve learned that life is a memory box. Nobody knows what’s around the corner.

These days, instead of putting barriers in my way, I knock them down. I am creating loads of memories for myself and for my children.

My advice to others would be, find something that floats your boat. Don’t put things off. We are responsible for our own happiness. It took me a long time to see that. I always thought you needed to be part of a double act but I learned that other people are not going to make you happy.