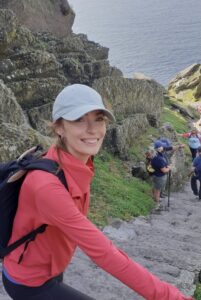 “If you have lungs, you can get lung cancer”

Bronwyn hopes that by sharing her story she can help challenge people’s thoughts on lung cancer, break through stigma and misjudgement and increase awareness about the facts of lunch cancer.

“Lung cancer can happen to anyone, regardless of lifestyle factors. I’ve never smoked or had significant exposure to other harmful carcinogens, and I have lung cancer.”

Bronwyn returned to Cork in 2019 having spent 7 years in Australia. A primary school teacher with a passion for art she had started her own business running art classes and camps for children, and it was going well until the Covid-19 pandemic hit and stopped her in her tracks. The pandemic however was not the biggest challenge to come.

Bronwyn was diagnosed with advanced lung cancer in September 2020.

“I was completely shocked; it was like an out of body experience when I heard the diagnosis. All I could think was how? They must have gotten my results mixed up with someone else. I’m young, have a healthy lifestyle and never smoked, it just didn’t make sense. But, like so many people I had no awareness of the reality of lung cancer and the fact that you only need lungs to get lung cancer.”

Bronwyn had started to get persistent headaches in July 2020, along with visual disturbances, tinnitus and a stiff neck. Her symptoms worsened over the summer, and she was referred to Cork University Hospital for further tests. It was quickly discovered that she had a large brain tumour that required emergency surgery, as well as smaller tumours in her lung, liver and spine. Eventually she was informed she had metastatic lung cancer.

“My tumour biopsy was sent for biomarker testing which showed that my lung cancer is caused by a gene mutation, called EGFR. This was very good news when it came to my treatment options as I was able to start a targeted therapy treatment called osimertinib which involves taking a pill once a day. I’ve been taking it for two years now and it’s cleared most of my tumours and is doing an excellent job of keeping it all stable. Targeted therapy is a huge advancement in the treatment of some types of lung cancer and other cancers.”

Bronwyn is very thankful for the incredible support she has had from family and close friends but recognises that this is not always the case and how isolating a cancer diagnosis can be, particularly lung cancer. There can be a lot of misunderstanding and judgement which can lead to feelings of isolation and a late diagnosis.

“Everyone who receives a lung cancer diagnosis will be asked, “did you smoke?”, implying that they are to blame for their diagnosis and deserve less empathy. You don’t get that with any other cancer. There is not enough understanding around smoking being a very challenging addiction or that up to 20% of people with lung cancer are non-smokers or have never smoked. This stigma has other massive consequences such as underfunding in lung cancer research, the absence of lung cancer screening programmes and a lack of awareness of symptoms, which is frightening considering it kills more people than any other cancer by far.”

She hopes that by sharing her story she can increase awareness of lung cancer and the need for more education, support, and compassion. Bronwyn has found the support she received from The Irish Lung Cancer Community (ILCC) to be incredibly valuable. They hold a monthly virtual chat, providing a safe space to talk to others facing similar challenges and provide practical information through their social media pages, webinars and events.

The symptoms of lung cancer are varied and can be easily dismissed which is a big reason why most people end up being diagnosed at an advanced stage. But, if caught early the chances of survival increase substantially. Bronwyn did not experience any of the typical lung cancer symptoms, besides some weight loss which was put down to stress.

“Lung Cancer is an insidious disease, the symptoms can often be brushed off as something far less serious and often symptoms only become noticeable once the cancer has spread and is harder to treat. This is why it is so important to get checked out if you notice changes in your body. The time it takes for cancer to advance from stage one to stage four is a lot shorter than people realise. An early diagnosis makes all the difference”.

Bronwyn remains positive and proactive in minding her physical and mental wellbeing, by getting outdoors for sea swims and walks and even began kayaking during the summer through an initiative by Cork Arc House and the Kinsale Outdoor Education Centre, called Ladies Who Launch.

“I view life very differently now; I don’t stress about the little things in the same way. That’s not to say I don’t get anxious, I’ve just had to learn to manage it better as I don’t want to waste time worrying about things when I could be enjoying my life.

People with lung cancer, like all cancer patients, deserve compassion as well as equality in research funding, treatment and screening protocols and we’re a long way from that currently. I hope this Lung Cancer Awareness Month will bring a lot more attention to the facts of lung cancer and a greater empathy for people impacted by lung cancer.”

Bronwyn is sharing her story in support of The Marie Keating Foundation’s call to action for a comprehensive Lung health check for those at high risk which can find lung cancer earlier than when symptoms appear, giving treatments the best chance to save a life. This November, during Lung Cancer Awareness month, the Marie Keating Foundation is partnering with people with lung cancer, clinicians, cancer researchers and you the Irish people to call on the Minister for Health to introduce a lung screening trial in Ireland.