Martin is a taxi driver based in Kilkenny. He was diagnosed with prostate cancer in 2010 and had a radical prostatectomy in 2011. He received the all-clear in January 2016. He attends his local cancer support centre, Cois Nore. 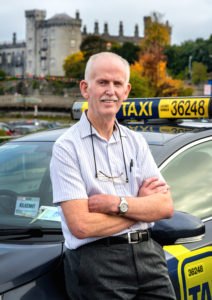 The diagnosis took a while to sink in, and it was a while before I had my operation. I had a certain amount of incontinence post-surgery, to the point where I always had to carry a change of clothes and bring a bag with me everywhere I went. I was going to Dublin for my appointments so that was a problem in terms of travelling. That was very tough.

I eventually had the sling operation and that fixed my problem and it hasn’t bothered me ever since. That has given me complete freedom – important considering I am a taxi driver and would be out and about for long periods of time. The cancer diagnosis really affected my life – I couldn’t work for a year and a half and there were financial problems as a result of that. We are still sorting that out; we are getting back on our feet now but my credit rating has been compromised. These are the issues that people don’t think of when they first get their diagnosis. It was mentioned, and there were leaflets and things, but when you’ve just been told you have cancer that is the furthest thing from your mind. I didn’t realise how much it was going to affect my life going forward. My wife was a marvel in that regard – she sorted so many things.

I have gotten so much information and support from my local cancer support centre in relation to dealing with the aftermath of the operation and the cancer treatment. Now I work with the people at the centre to help men who have been diagnosed but haven’t had the operation yet, and advise them on everything they need to consider. We are trying to get the message out there to men – so many are too proud to talk about all these things. Having gone through the experience, we know all the different pitfalls that can occur and we can tell our own story and give them the best advice.

I had always been a heavy smoker, but on the eve of my operation I smoked my last cigarette and I have never touched one since. I am a lot healthier now than ever I was.