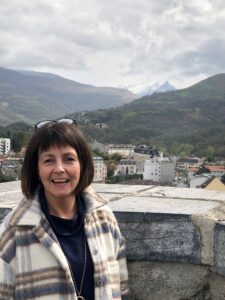 Lung Cancer had never crossed Deirdre’s mind, she was fit, healthy and a non-smoker she thought “Why me” but as she has learned on her journey Lung cancer has many faces so “Why not me” is a more valuable question to ask.

Sligo mother of 3 Deirdre Staunton loved to run and embraced an active life and as she hit her 50’s she was prioritising this more in a bid to keep herself feeling youthful, healthy and fit for as long as possible. As Deirdre neared her 51st birthday she was well used to keeping up with her teenage children on their runs, but then something started to change in 2020 and the runs became much more challenging.  Deirdre put down the breathlessness and fatigue to asthma and the onset of perimenopause, at 50 this was an easy culprit to lay the blame on.  Through recurring pressure from friends to get checked out and increasing frustrations with her declining fitness and increasing fatigue, Deidre made an apt with her GP.  That appointment would change everything.

On the day of her 51st birthday Deirdre found out what was really the cause of her symptoms.

Lung Cancer had never crossed her mind as a possibility, she was fit, healthy and a non-smoker and she thought “Why me” but as she has learned on her journey Lung cancer has many faces so “Why not me” is a more valuable question to ask.

“I was sure that was it, it was perimenopause.  I was almost 51 and still running like a 20-year-old and trying to keep up with my usual times. I was becoming a lot slower and really noticing the shortness of breath, I would have to stop and take a breath on my usual run after work. Friends had been urging me to go make an appointment for weeks and threatening to make it for me.  I decided I would finally make that appointment with my GP certain it was simply asthma and hormonal!”

Deirdre Staunton will never forget her day of her diagnosis. It was her 51st birthday. Having missed out on having a big celebration for her 50th the family had planned a big climb all together to celebrate their outdoors loving mums 51st.

Before the family climb commenced Deirdre had another important appointment to attend at Sligo University hospital where she worked as a Resuscitation Training Officer. She was booked in for pulmonary function tests and a chest x-ray as recommended by her GP.  What she expected to be a few tests ahead of enjoying the rest of her birthday with family led to a full day and then that evening finding out that she had lung cancer.

“I’ve 3 kids and I told them I’d be home by 11am and we would climb the mountain, but It didn’t quite happen like that as I ended up being send for x-rays, CT scans and a number of tests that had me at the hospital until 9pm, so my birthday didn’t quite plan out the way I expected, I was just turning 51 at the time ,fit and healthy and now I’m 52 and living with advanced lung cancer”

Deirdre never considered lung cancer as she like so many others had a perception of lung cancer being something that happened when you smoked or were exposed to other environmental factors, not something a fit healthy 50-year-old woman would need to consider.

“Don’t dismiss lung cancer just because you do not smoke, I mean, I would never, never have it on my radar. I was getting, you know, my usual screening for breast cancer and my cervical screening, but never considered this could happen to me”

Deirdre’s form of lung cancer is caused by a genetic mutation. The gene is called the EGFR gene and causes cancer cells to grow and spread. In Deirdre’s case this was in her lungs where the cells built up to create tumours.

“Because of the mutation in my cells, instead of getting rid of themselves they were building themselves up. The build-up forms the tumour. Thanks to research my particular type of lung cancer can be treated with medication. It’s called targeted treatment. It’s an oral medication that you must take every day. But you can take it in the comfort of your own home without having to go into the hospital. It targets just the mutated cells in your tumours, so it’s only working on my lung cancer. It does not have the disastrous side effects, like some of the chemo therapies do. I have monthly blood work and three-monthly surveillance scans to see if they become active. If that happens There are other options that we can try. And you know, ten years ago there was no line of treatment like this, so I feel lucky in that regard”

Finding out she had lung cancer came as a shock to Deirdre. She did not want to share the diagnosis beyond close family and found that the diagnosis became quite isolating. As someone who was active socially within the community to now feel so alone it took months for her to break out of this mindset and feel ready to connect, accept support and learn more about lung cancer and the lung cancer community.

“I needed to process it myself, at first, I didn’t want to research, reach out or talk about it. I wasn’t ready. I felt like people were different with me. It was quite isolating. Cancer especially lung cancer can be quite difficult for people to talk about, so they turn the other way or try to escape the difficult conversations. That needs to change. I am very sensitive and for the first 12 months I couldn’t talk about it without my lip trembling and fighting the tears but now that has changed, and I found that speaking out about it has opened me up to more conversations and support. So, when you are ready, I advise that others to take that step,”

Deirdre has found herself finding empowerment in speaking out, having those difficult conversations, and helping amplify the voice of lung cancer.

“If you are unfortunate to get diagnosed, be an advocate for yourself, you know. Do your research, seek support, If you’re able to at first of course. Now I wasn’t able for it for a full twelve months, and I come from a healthcare background. My working life was propelled by science and propelled by research. But I was not going to look up anything but then I found the Irish lung cancer community, who are fantastic, and they would post information that’s relevant and helpful.”

Deirdre felt ready to return to work in April 2022 feeling she had learned to manage the side effects and settled into her new normal. Unfortunately, Deirdre then suffered another blow and had a stroke. She has now been left with some additional challenges cognitively that have meant she needs to delay a return to work and focus on further recover.

When asked about coping with the challenges she faces Deirdre keeps humour at the core “So it’s been a journey of discovery, not one I particularly wanted you know! Physically its hard, gosh the tiredness. Normally I would be stopping at the gym on the way home from work and now I’m not even able to work.  I try to deal with it using black humour and getting on with things. Life can’t just stop. Me and the kids make jokes and laugh about it.  I have been writing my own book as a project, it is called ‘…but Ya looks great’ a very typically Irish comment to make!  I would get this comment a lot when you tell people you have cancer. It bothered me initially when you are struggling but now, I take the compliment and find it quite amusing, ye have to find the humour.”

Deirdre shares her story to help increase awareness of lung cancer, highlight the signs and symptoms and the fact “Why not You”.

“And here I am. I’m not somebody gasping for breath. You know I am the face, of lung cancer. It happens the healthiest of people with no bad habits, and likewise if this happens to people who may have smoked, it’s horrific for both of us, you know it’s not any less horrific for somebody who has smoked. We deserve the same compassion and support.  People need to be aware of the fact that it’s a silent sort of disease because lots of people that I have spoken to get their diagnosis when they were at a very late stage! Perhaps if it was in my radar when I started getting breathless in August 2020 I might have thought differently. It’s like with how educated we all are on breast cancer, if you feel a lump, you think Oh, my God, this could be breast cancer and you go get checked or screening is available. It never entered my radar that breathlessness and that tiredness could be lung cancer. So please anyone reading don’t ignore these kinds of symptoms, ask the question with your Gp. If there is any way of checking this out? I If you’re not, you know, satisfied with how your body is functioning don’t just accept another course of antibiotics because the earlier you get checked out, they the better treatments will be available to you. That is incredibly important.”

Deirdre is sharing her story in support of The Marie Keating Foundation’s call to action for a comprehensive Lung health check for those at high risk which can find lung cancer earlier than when symptoms appear, giving treatments the best chance to save a life. This November, during Lung Cancer Awareness month, the Marie Keating Foundation is partnering with people with lung cancer, clinicians, cancer researchers and you the Irish people to call on the Minister for Health to introduce a lung screening trial in Ireland.