Matt had been going for regular PSA tests for a number of years when he was told in 2011 that there was a 25% chance that he had prostate cancer. He decided to have robotic assisted surgery. This left him with some difficult side effects which he struggled with for a year and a half. However, after further surgery, these were rectified and he is now in good health. Matt speaks with other men who are affected by prostate cancer about his experience to help them with their cancer journey. 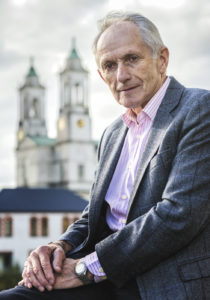 My wife is very health conscious and was great at encouraging me to look after myself. I was having my PSA levels checked twice a year and was seeing my levels go up gradually. When my doctor told me that there was a 25% chance that I had prostate cancer, it was a bit of a shock but I decided that I would deal with it head-on. I had robotic-assisted surgery to have my prostate removed in September 2011.

After the surgery, I was left with side-effects that included incontinence. I really wasn’t expecting this as I thought it was a rare side effect. It wasn’t a happy time for me. I found it difficult but I had great support from my wife who kept me on an even keel.

After a traumatic year and a half, during which my doctor tried other solutions for me that didn’t work, he sent me to another specialist who operated on me and since then, I have been in absolutely great health. I am now fit as a fiddle. Some mornings I leave the house at 6.30am and walk six miles. I play golf, I lift weights, and I spend time with my grandchildren.

After I had come through my difficult experience, my brother-in-law sent me an article about a cancer support centre. I thought it looked interesting so I visited with my wife and we found it so warm and welcoming. They gave us great information, too. My wife and I now go there regularly. We do weights there and I am part of the choir there, too. I have never met a more hospitable group of people who, over the years, have been a great support to me and whom I consider to be great friends.

The cancer centre also puts people in touch with me who are affected by prostate cancer. Some of them are just diagnosed, or they might be deciding between treatment options or affected by side effects. I usually tell them a little bit about my own experience as it helps to talk to someone who’s been through it.

I always tell the men who are affected by side effects to go back and talk to their doctor. There are lots of options out there and you don’t have to just accept your situation. I had a very difficult time for that year and a half but now that I’ve come through it, I am really enjoying life.

The whole experience told me to look after my health. I’m always surprised by the number of people I come across who just don’t want to know. They think they are better off not knowing. But at least if they know, they can do something about it like I did. I played a game of golf yesterday, and walked six miles.