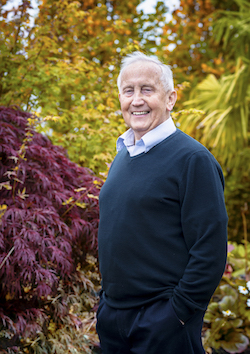 Sean was diagnosed with prostate cancer in 2009 following a check-up for what he thought was a pulled muscle. It recurred in 2013. GAA legend and manager of the Meath Gaelic football team for 23 years, he is also a fifth-generation herbalist.

It was May Bank Holiday 2009 and I met someone I hadn’t seen for 20 years. I threw my arms around them and I got the most awful pain in my backside. I thought it was a straightforward pulled muscle and I mentioned it to the orthopaedic surgeon I see every year for my gammy knee. He just thought something wasn’t right and ordered an MRI and it turned out that I had quite an aggressive tumour in my prostate. I had no other symptoms. I feel like someone was looking out for me.

It was testosterone driven so I had to be put on hormone suppressants, and I also had brachytherapy and radiotherapy. My wife is 18 years younger than I am and we have six kids so it was a bit of shock for us all. My kids were so young so it was especially hard.

I am a herbalist by profession but this is the complementary side of medicine. I had to get used to being in the healthcare system and taking medication and especially the hormones but I understood it was a necessary precaution. I had mood swings which my family understood and tolerated at first but then they just thought I was a grumpy git. People thought of me differently and treated me differently – I hated that. I didn’t want to be just thought of as a person with cancer so I just kept going as I’ve always done.

I marvel at the great oncologists who do such great work – it’s not just a job to them. And the Marie Keating Foundation do such great work. They have helped so many people get it off their chest which is vital as the patient perspective and experience is so important. There are also people doing great work in research and treatments are improving all the time. I am one of the lucky ones that came through this experience and it is a powerful place to be. I have great vitality and great energy now. I would tell someone who is newly diagnosed not to be afraid to ask questions and also to believe in themselves. Modern medicine does amazing things but you have to be ready to put in some of your own stuff to the battle as well.