At 50, John Wall is a father and husband living life with an advanced prostate cancer diagnosis. When John heard about the Marie Keating Foundation’s “Stand Up For Your Prostate” campaign and learned about how the campaign was encouraging the men of Ireland to be more open about their health and take the stigma out of prostate cancer, John wanted to share his story. 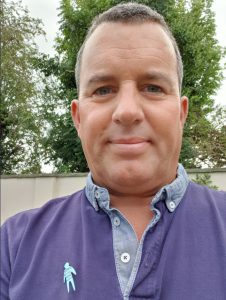 For 46 years of my life, I never thought that my health would ever be an issue. I was happily married with a loving family, a good job

and a great future to look forward to.

Don’t get me wrong, I wasn’t exactly the fittest person in the world, but I had given up drinking and smoking many years ago and also had an annual medical at work each year, so I thought I was fine. That was me living blissfully unaware of what lay ahead.

I noticed during the early months of 2017 that I was having to pay frequent visits to the loo, especially at night. I never paid much attention to it. As awkward as it became, I thought it was just part of my middle-aged status. I did go to my GP twice but because of my age, nothing was considered other than an infection, so off I trotted with some antibiotics. I did have my PSA (Prostate-Specific Antigen) checked as part of a blood test and the results were off the charts but I was not a candidate for Prostate Cancer. I didn’t fit the age profile. I was too young. Oh, the benefit of hindsight!

In July 2017 I began to experience slight pains in my right leg. Initially didn’t think much of it, but it got to the point where even whilst sitting, I had difficulty lifting the leg. I’m was never one to head straight to my GP on a whim, but my instinct told me this time was an exception. That evening, I was referred for a scan that would change our lives more than we could ever have imagined. A few hours after talking with my GP, my urologist Syed Jaffry, (my new best friend) was asking me the dreaded question, “Do you have anyone else with you?” Without Syed’s advice, I may not be writing this right now.

My scan showed an enlarged prostate, along with a significant enlargement of my lymph nodes. Trouble with a capital “T” lay ahead. After several days of poking, prodding and discussions using words that we couldn’t even spell, our worst fears were confirmed.

The diagnosis was Stage 4 Prostate Cancer with advanced secondaries in my lymph nodes. There was a lot of gasps not only from my wife and I but also my primary care team. I was only 46 years old. Surely not?

What next? We wanted second opinions, so we got several! Travelled to Dublin, Cork, Limerick and Galway. All agreed that chemotherapy was the first line of defence but only one agreed on what should happen next. My new best friend, Mr Jaffry advised that I would have no option but to travel abroad for radical surgery which would be dependent on the success of the chemotherapy. All other advice basically centred around prolonging my life so that I could get my affairs in order. Needless to say we chose the former!

Fortunately, after several rounds of Chemotherapy, we made arrangements to travel to University Hospital Leuven, a European Centre of Urology Excellence to meet Dr Steven Joniau, my surgeon. That was in February 2018. After a thorough consultation, he told us to come back the following month for surgery. On March 15th I had a radical open prostatectomy where along with my beloved prostate, 61 of my lymph nodes were also removed. My wife Deirdre stayed with me throughout and looking back, I wouldn’t have pulled through without her support. It was major surgery that undoubtedly has significantly prolonged my life. After 2 weeks we travelled back and since that trip, we’ve never looked back.

We’re not done yet! After a trip to Lourdes in September 2018, I had 39 cycles of ARC Radiation in The Galway Clinic. It must be said that the advice elsewhere was not to proceed with this, as it would involve radiating a very large area but upon the advice of my surgeon we proceeded. Sure, what could go wrong? Well, let me tell you, absolutely nothing. I feel better today than I’ve ever felt in my life.

Today the only treatment I’m on is called ADT (Androgen Deprivation Therapy). It suppresses my male hormones, induces the menopause and makes me sweat whether I’m in a freezer or a furnace. But hey, I’m alive and living a good life. That’ll do me.

During all of this, I met the amazing Laura Brennan whom I was incredibly fortunate to become good mates with, and without her advice and friendship, I really would doubt that I’d be living with such positivity. She has practically single handily changed the attitudes of so many regarding the HPV Vaccine and inspired so many others to make the most of what you have while you have it. As Laura helped others and raised awareness, I am trying in my own way to do what I can, while I can.

Recently I’ve reached out to other men on Twitter to offer advice based on my experiences. Let me tell you, I was amazed at the response. We the men of Ireland need to talk, talk to each other, support each other. I’ve come across some amazing people that all going well, will be meeting after the summer. A group of us have supported each other online and are planning a little get together later in the year which I am looking forward to immensely.

We have no idea what the future holds except that my illness is not curable, but at least for the time being, is responding well to treatment. I raise awareness surrounding vaccines and prostate cancer through social media, primarily Twitter and also through radio and newspaper interviews. I find it’s incredibly therapeutic to talk. Helping others helps me.

This episode of my life has taught me the real meaning of life. Live every day, enjoy every day. Cherish those close to you and let them cherish you.

My family and I have been incredibly fortunate that I have an employer as understanding as The IAA, without whose assistance my quality of life would be remarkably different. Not for a moment do we take for granted all that has and is being done for us. We simply cannot thank you all enough for your support.

Finally, especially to my family, my friends and work colleagues, Thank You. A hundred thousand thank you’s”

To learn more about our Stand Up For Your Prostate campaign, visit our homepage here.

To show your support, and follow in John’s footsteps, get one of our Stand Up For Your Prostate pins here.